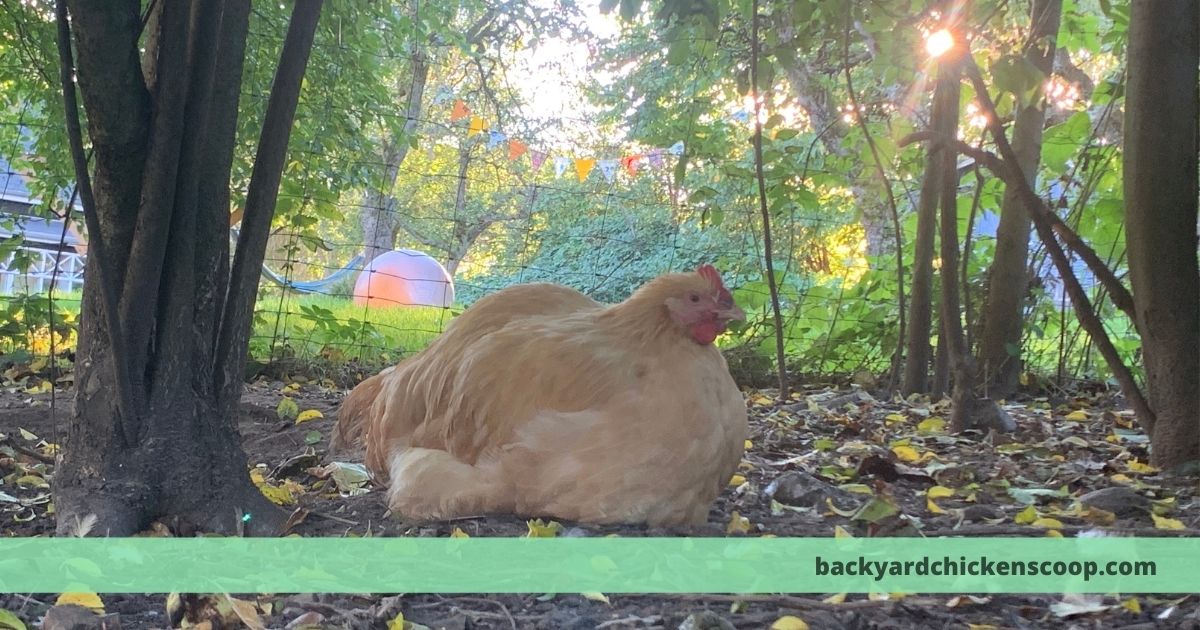 Taking care of chickens can be a fun and rewarding experience. However, just like caring for any animal, owning chickens also comes with a lot of responsibility. Unfortunately, chickens are just as prone to illness and injury as any other pet, and they can suffer from carelessness and malnutrition.

It’s especially important to keep an eye on your chicken flock for signs of illness or injury.

One common ailment that can affect chickens is called perosis, also known as a slipped tendon. If you suspect one of your chickens may be suffering from perosis or would like to know how to prevent it, read on to learn more!

The history will include continued feeding on poor quality feed or on an excess of leftovers, with the lack of especially choline, manganese or biotin.

One or more chickens will exhibit processively difficulty walking and sign of pain. One of both hock joint will be swollen.

Typically within the first six weeks of life.

The most predominant clinical sign will be swelling of one of both hock joint. The skin over the affected hock joint can also have light to server sores as evidence for weight-bearing here rather than on the foot.

Feather discolouration discoloured combs and loose stools may also be present as evidence of poor nutrition and lack of energy.

The diagnosis is evident on clinical signs and from the history. The slipped tendon will be somewhat evident from skilled palpation of the hock joints.

Suturing or tacking the tendon in place has been tried, and showed variable success. Results are usually better when performed on young chickens.

Splinting the leg has been tried. Just make sure not to bandage the leg in extension, and have frequent changes and rechecks with the vet.

Euthanasia might be the best option in older chickens.

The prognosis is poor.

Perosis is also known as slipped tendon or chondrodystrophy. It is most prevalent in young birds, particularly chicks during their first six weeks of life. In some cases, newly hatched chicks can also display signs of perosis.

Perosis can lead to a variety of symptoms, including feather discolouration as well as discoloured combs. The most common symptom of perosis, however, is twisted or swollen legs. This is caused by the tendon slipping from the back joint of the bird’s leg or legs. The joint will become swollen and twisted, eventually crippling the chick.

Chicks with perosis will not be able to straighten the leg on their own, and it will often splay out diagonally. Even if perosis is only present in one leg, the chick will still have a difficult time walking around. Furthermore, perosis will only get progressively worse if not treated. Because chickens with perosis are unable to walk around, their growth will also be negatively affected.

In many cases, the swollen joint will become scratched or irritated, eventually leading to a wound or lesion. Other chicks in the flock will usually begin pecking at the wound, exacerbating it and often leading to infection.

This painful condition can easily be mistaken for big hock disease, spraddle leg, or other leg injuries. While this is not always the case, you can sometimes distinguish perosis from other ailments or injuries by checking for other symptoms. Chicks suffering from perosis may also have brittle, pale feathers, dermatitis on the feet and legs, or loose droppings.

Many chicks with perosis exhibit signs of pain, and often cry out more frequently than others.

What causes Perosis in chickens?

Perosis is primarily caused by nutritional deficiency. Many owners are unaware that feeding their chickens scratch and table scraps as the main components of their diet is actually dangerous. Just like any animal, chickens require certain vitamins and minerals to stay healthy. Chickens require a balanced diet that is rich in nutrients.

In most cases of perosis, chickens are lacking in vitamin B, and/or manganese and choline. If you are mainly feeding your flock of chickens empty calories without any vitamin and mineral supplements, they will be far more likely to develop perosis. In some cases, perosis can also be caused by an excess of calcium during a chicken’s early life.

The first few week’s of a chick’s life are essential in determining its lifelong health. Inadequate access to water, excess calcium and a lack of manganese, choline, folic acid, biotin, and pyridoxine can all cause perosis. Chicks also have different dietary requirements based on their age and growth stage, so make sure you are providing the proper diet for your chicks as they grow.

Some chicks may also hatch with perosis. While the exact causes of this are unknown, it’s believed there may also be an underlying genetic component to this ailment. In some cases, it may also develop in the embryo from improper incubation.

Finally, perosis can also be caused by overcrowding. Make sure your chicks have plenty of space to roam around. Not only will this help prevent perosis, but it will also reduce the chances of other diseases and injuries.

In most cases, perosis is preventable. Since it is primarily due to nutritional deficiencies, it’s easy to make dietary changes to prevent the condition. However, some chicks may develop perosis from an already existing leg deformity, meaning that it isn’t always avoidable.

Perosis is not a contagious condition. However, if one chicken in a flock is suffering from perosis, it is likely that other members of the flock will also suffer from the same condition.

Since perosis is caused by nutritional deficiencies, it is likely to arise in several flock members who are all on the same inadequate diet.

However, keep in mind that perosis can often lead to open wounds and lesions, which can become infected. If you notice a chick with perosis, make sure to separate it from the rest of the flock. This will prevent the other chicks from worsening the wound through pecking, and it will also stop the spread of any bacteria or infection.

Chicks with perosis are also typically weaker and in pain, so being surrounded by more lively flock members can cause distress. Make a safe, warm place for the suffering chick, and be sure to provide access to fresh, clean water.

Perosis is sadly untreatable in most cases. If you notice perosis within the first twenty-four hours, it is sometimes possible to splint the leg back into place. If you are especially determined to treat the condition, it’s also possible to fix perosis through surgery, although this is a rather pricey option.

If you suspect that you have a chick suffering from perosis, immediately separate it from the rest of the flock, and make sure it can easily access food and water. You should schedule an appointment with your vet right away, as they can give you a good list of options. They will often prescribe antibiotics to prevent infection, and you can also use aspirin to help with the pain.

Sadly, however, perosis is untreatable in most cases. While you can slow or even halt the worsening of perosis through a properly balanced diet, it’s rarely possible to reverse it entirely. Since perosis is typically painful, it’s unwise to allow a chicken to suffer a crippled leg. In many cases, a chick suffering from perosis will need to be euthanized.

As sad as this is, it’s important to consider a suffering chick’s best interests. It can be hard to put down an animal, but ending lifelong suffering as soon as possible is typically the best option. Unless you are lucky enough to catch perosis in its early stages, your vet will likely recommend euthanasia. Even though surgery can correct the deformity, it’s a long process with a painful recovery period.

To save your chick pain and early death, it’s essential that you take measures to prevent perosis.

The biggest way to prevent perosis is to provide nutritionally balanced feed. Don’t feed your chickens scratch or table scraps as the main component of their diets. Furthermore, avoid buying cheap feed, as manufacturers usually fill it with empty calories. The good quality feed may be on the more expensive side, but it is well worth it to keep your chickens healthy throughout their lives. Be sure to buy feed that contains plenty of manganese, choline, and vitamin B.

On the subject of feeding, also be sure to provide food that is appropriate for your chick’s stage of life. Chicks require very different food from fully grown chickens.

While you may be tempted to provide your flock with plenty of nutrients to avoid perosis, steer clear of calcium supplements during the early stages of their lives. Excess calcium can actually cause perosis in some cases, so you should avoid calcium supplements until your chickens are fully grown.

Clean, healthy living conditions are a must for preventing perosis. Do not overcrowd your flock, and make sure all of your chickens have access to clean water.

While it’s not entirely known yet, some believe that chicks can hatch with perosis due to improper intubation. If you want to avoid this, be sure to follow all the proper incubation steps if you plan on hatching your own chicks.

Finally, perosis is more prevalent in some breeds than others. Fast-growing breeds are more likely to develop perosis, particularly broiler breeds.

Overall, perosis is an easily preventable condition, so long as you do your research and are determined to give your chickens a good quality of life.

Perosis is a painful condition that, in most cases, cannot be treated. In many cases, chicks unfortunately have to be put down. Thankfully, perosis is easily preventable. To ensure the wellbeing of your chickens, be sure to provide a nutritionally balanced diet that is rich in manganese, choline, and vitamin B. Especially in the first few weeks of your chicks’ lives, be sure to provide adequate space, access to fresh water, and avoid giving too much calcium.

Keep a close eye on your chickens for any signs of disease, distress, or injury. If you are providing your chickens with a healthy living space, then the chances of them developing perosis are quite low!